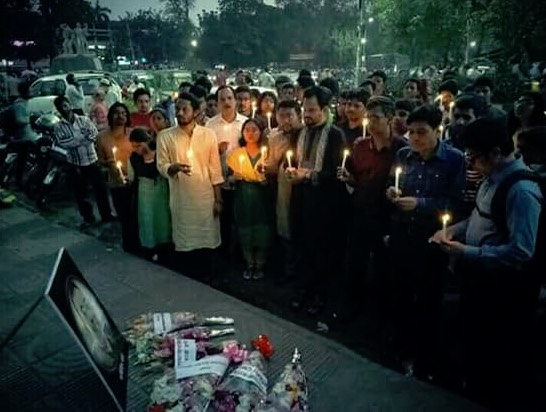 People paying homage to the memory of Avijit Roy in Dhaka on the third anniversary of his assassination. February 26, 2018.[/caption]

It has been three years that Avijit Roy was killed right outside the Dhaka Ekushey Book Fair. The attack also resulted in serious injuries to his wife, Bonya Ahmed. The Bangladesh Government did not want to appear too zealous in curbing the Islamist militancy and took an unhurried approach in going after Avijit's killers; the killers presumably belonged to a group known as Ansarullah Bangla. During the years of 2015 and 2016, buoyed by the authority's irresolute response to Avijit's murder, the militants unleashed a wave of terror that took lives of a number of promising young men whose only fault was that they were not afraid to express what was in their mind. It took the heinous killing of 20 foreigners in July of 2016 in Dhaka's Wholey Artisan Bakery and Restaurant for the Government to take the militancy seriously.

Unfortunately, since then, none of the anti-militancy steps that the Government adopted came with a clear goal. The authorities did not work out a path for curbing the extremist philosophy and did not point out how the objectives of the Islamist militants are incompatible with the spirit of the country. The only course that the authorities took is to engage the militants in their hideouts.

The reluctance of the Government to take prudent actions in such situations points to a creeping willingness on its part to stay in power by placating the rising Islamism. It has made special budget allocations for building mosques and training of Islamic clergy. Under pressure from Hefazat-i-Islam and its own Islamic wing, it has systematically removed texts by renowned authors from the school curriculum; these texts were expunged because of the fear that they might promote multicultural perspectives or introspective philosophical ideas.

Extremist Islamic organizations demanded the removal of a statue in front the Supreme Court representing the Lady of the Justice as they equated this to idol worshipping; the Government acquiesced and moved the statue to a place out of public gaze. It has yielded to the demands of these organizations by reducing the minimum marriage age of girls below 18 and has made several controversial changes with respect to the rape victims. Deep Islamisation is gradually changing the underpinnings and fabric of Bengali cultural identity; hijab – the veil covering the head of a woman– which was virtually unknown in Bangladesh 40 years ago, now has a ubiquitous presence.

It might seem, in some cases, the Government is forceful in combating extremists, but by continual abetment of Islamisation of the country it has failed in its ideological commitment to secularism and protection for the minority component of the population. In the long run, simple law and order measurements are not enough to combat theocracy.

In addition, the present Government, while claiming secular credentials, is zealously implementing an imperfect law called the Internet, Computer and Technology Act (ICT) 57 that calls for imprisonment and fine for people who offend religious sentiment. People who are jailed under this obscure law, are marked for life by extremists. Many of us hoped that the authorities would rescind this draconian law, but recently the Cabinet of Ministers has approved a Digital Security Act that not only keeps the elements of ICT 57, but has included other provisions that threaten the rights to freedom of speech enshrined in the Bangladesh constitution.

During the three years since Avijit Roy's murder the Bangladesh Police announced numerous times the killers have been apprehended, but without any further clarification the nature of these arrests remained obscure. In the course of time, apparently a number of arrestees obtained bail and the police have not given any explanation why these people were given bail. Recently, the Counterterrorism and Transnational Crime Unit (CTCU) of the Police has notified that they have three people in custody directly related to the murder and the Unit is going to bring a charge-sheet against them. The CTCU admitted that they have failed to arrest at least five of the accomplices, including the mastermind of the operation Major Zia who apparently was present at the murder scene. The failure of Bangladesh Government to bring these killers to justice points to the general apathy it has shown to find the root cause of extremism or to curb it in a judicious manner.

In the meantime, it is heartening to see that Bangladesh and the world has not forgotten Avijit Roy's legacy. The Freedom From Religion Foundation has just announced the creation of an annual award in his name.On the third anniversary of Avijit Roy's assassination, his name is being remembered among countless people across the world. memorials were held in both Dhaka and Kolkata to celebrate his life. There is an International Freedom Book Fair in the Hague that is held every year in Avijit Roy's memory. A room in the Koorenhuis Art Center in the Hague is named after him.

When activists in Dhaka, however, tried to name a segment of Teachers Student Centre (TSC), near where Avijit was killed, as Avijit Corner or when they tried to create a memorial there for all the murdered Bangladeshi humanists the authorities forcefully rebuffed that effort. Booksellers are afraid to sell Avijit Roy's books and all his books have disappeared from the market. Even a bestseller by Bonya Ahmed - a book on evolution - was taken off the market this year and did not feature in the Dhaka Ekushey Book Fair. The Government, it would seem, is complicit with the extremist ideas and is forcefully implementing ICT 57 Act against book publishers and writers, and monitoring very new book that appeared in the recent Dhaka Book Fair.

We do not expect these adversarial conditions to cease in the near future, but we are confident that the concept of the freedom of thought would triumph in the long run;  Avijit Roy's legacy will continue the spread of rational and logical discourse and will help in building of a humane society.