Turkey may be viewed by the developing countries as well as by the Muslim world as an advanced industrialised country very much in tune with the Western democratic system. But this perception is largely misplaced now and very much out of date. The reality of Turkey's position is far from this perception.

Mustafa Kemal Ataturk, a supremely enigmatic nationalist and visionary leader, picked up Turkey from its darkest hour in 1923 when Ottoman Sultanate was abolished and a modern, secular republic was born. He became the first president of the republic and run the country as president until his death in 1938. He introduced a number of revolutionary reforms to this decrepit Islamic state, such as the abolition of all out-dated Islamic institutions, the emancipation of women, introduction of western education system, legal codes, dress and the replacement of Arabic script with Latin ones. Good cordial relations with neighbouring countries and collaboration with the West were the central planks of the foreign policy. It was not for nothing that he was accorded by his countrymen the title 'Ataturk' – Father of the Turks.

Fast forward time by 80 years from 1935 to 2015 and you would see Turkey in exact reverse situation to that of 1935. Islamism is ripe in the country, women are in veils, Muslim Brotherhood is all but its name running the country and Islamic terrorists are patronised by the incumbent administration. Almost all the neighbouring states are at loggerhead with the present administration and the previous friendly states are keen to maintain their distances.

How did this severe and unprecedented reversal of Turkey's predicament take place, even though Kemal Ataturk is still greatly revered and the country maintains a façade of western democracy? The answer lies solely with the mind set of present president, Recep Tayyip Erdogan, who over the past 12 years or so had taken Turkey away from the secular state into the fold of Islamism. Erdogan, a semi-professional footballer in his early life, comes from an Islamist political background who founded the political party called AKP in 2001. As an aggressive and manipulative politician, he managed to become the prime minister within just two years in 2003 and remained in that position until 2014 when he became the president in 2014. Only a month ago, in a re-election he managed to get by duplicitous means the overall majority in the parliament and now, it is feared, that his autocratic streak will be unleashed to the full.

Syrian war just across the border had pushed Erdogan's Turkey to the forefront of the conflict, more like Pakistan in 1979 in the Afghan war. Whereas the Afghan war had only a limited number of protagonists – Islamists comprising Mujahedin supported by Pakistan, Arab States and America against the Afghan government supported by the then USSR – the Syrian conflict is infinitely more complex and convoluted. The number of protagonists is literally endless and alliances and adversities between them keep changing all the time.

Erdogan with his natural propensity towards Muslim Brotherhood (MB) had sided right from the beginning of the Syrian war in the summer of 2011 with the so-called Free Syrian Army (FSA), which was nothing but a loose coalition of rag-tag militia organisations. The main objective of this FSA is to depose the legitimate government of Bashar al-Assad. Erdogan's administration and Wahhabi Arabs (both Sunni) had visceral antipathy towards the Alawite Assad (Shiia) and hence it can be said that the centuries old internecine Shiia-Sunni conflict is being played out in Syria now. The Arabs and NATO member Turkey had managed to convince America that the dictator Assad should be replaced by a democratic leader (probably from the Sunni sect!).

Hardly did America realise that all of her Arab friends are vicious dictators themselves, all vying out to spread virulent Wahhabism under the disguise of democracy. When dictators like Saddam Hussain of Iraq or Col. Gaddafi of Libya were forcibly overthrown in the name of democracy, those countries descended into anarchy and Islamic extremism flourished.

When America and the West started supporting the FSA, the cheerleader Erdogan allowed Jihadists from across the globe and war materials from the Arab states to pass through his country undeterred. Only when ISIL/IS was spawned about two years ago declaring their ambition to create an Islamic Caliphate covering not only Iraq and Syria but also Saudi Arabia and other smaller Arab States, Arabs did realise that they had created a monster, a Frankenstein and gradually pulled back. Erdogan had nothing to fear from this but all to gain as IS are going to swallow the Kurds. The destruction of the Arab heartland is nothing but a collateral damage to Erdogan. 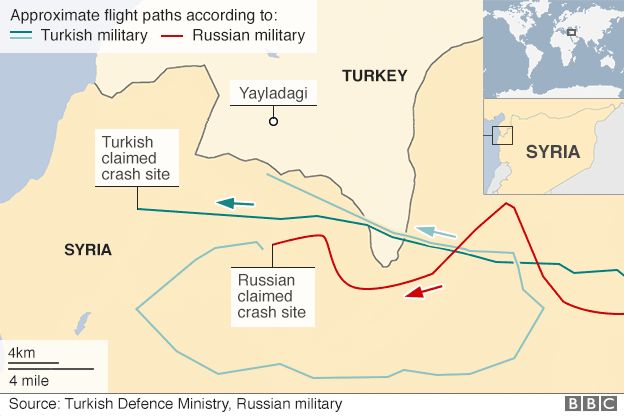 The arrival of Russia had changed the whole complexion of the Syrian conflict completely, to the detriment of Erdogan. Erdogan wants to destroy Assad and the Kurds and help IS, whereas Russia (as well as Iran) want exactly the opposite. America and European Union want to demolish IS, but do not want to be seen in the company of Russia!

The downing of Russian bomber plane (Su-24) last Tuesday (24 Nov 2015) by Turkey under the direct order of Erdogan was nothing but a vindictive step by him to provoke Russia into a direct conflict with the NATO and thereby let IS get respite from the Russian assault. The Russian plane was, even according to Turkish version, in the Turkish territory for only 17 seconds and when it was shot down it was outside its border. It may be pointed out that it is the first time a Russian war plane had been shot down by a NATO Member State since the end of Korean war in the early part of 1950s.

All the combatants in the Syrian conflict – America, Europe and Russia – had their primary goal to degrade and destroy IS, except Erdogan who is making all sorts of duplicitous moves to support IS. The Russian president, Vladimir Putin, warned Erdogan of "significant consequences" of his action of downing the Russian plane. But Erdogan bragged that he would do the same if Russian planes stray into Turkish territory. The Russian state news agency, Sputnik, warned, "The sick man of NATO, Erdogan's madness could provoke WWIII". Russia is taking all steps to terminate its economic links with Turkey. Last year four million Russians took holidays in Turkey and now there is a ban on selling any Turkish holiday in Russia.

This madcap Erdogan is taking Turkey backward, which is a direct reversal of what Kemal Ataturk had created. Turkey's prospect of joining European Union is all but gone and its existence in the NATO would be severely questioned. Also there is the uncanny similarity between Turkey of today and Pakistan in the 1980s. Like Pakistan, Turkey will be the hotbed of Islamic terrorists and that will devour the whole country. It is sad to see an advanced Muslim State reverts to primitive conditions only because of religious dumbness of a single person.