Europe is stunned, simply overwhelmed by the sheer size of the incoming migrants – men, women and children - from African and Asian Muslim countries. At no time since the Second World War, Europe had seen such a large mass migration of humans from other continents to Europe. European conscience and its libertarian principles have been subjected to severest strain, which had never been done before.

What is happening now is not an isolated, stray incidence where some migrants fleeing from a war-torn country or a ravaged landscape are seeking new abode or asylum in a far-flung European country. It has all the hallmark of a concerted, well-oiled operation of human trafficking by Islamist gangs - most likely to be offshoots of ISIS and/or Al-Qaeda operatives - drawing people, mostly Muslims, from most of the Islamic states of Africa as well as from Asian countries such as Syria, Iraq, Yemen, Afghanistan, Pakistan and Iran and herding them together into the shores of Europe. How else hundreds of thousands of migrants from multitude of countries are ganging up with a single motive of moving into Europe? 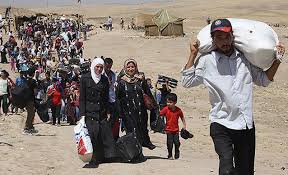 War is used as a fait accompli in this strategic goal. But there are innate flaws in this escapade. Iraq war had ended more than four years ago, when the American and Western soldiers had left the territory in 2011. There are, of course, some American and British military advisors still there; but they are not involved in any day to day military operation. Iraq has now a democratically elected multi-party government in place. Afghanistan also has a self-running government. The major turmoil following Col. Gaddafi's removal had long gone past. The country is now run by Libyans themselves. Admittedly there are armed factions fighting among themselves for power in Libya, but there is no full scale war-like conflagration there.

Syria is the only country in the region where armed conflict is still raging. The ISIS is trying to overthrow the Assad regime and Assad regime is fighting back for its life. America is trying to contain and control ISIS and Turkey is trying to contain both ISIS and the Kurds. The ISIS and other fundamentalist religious groups are supported and funded by Gulf Cooperation Council (GCC) countries to propagate Wahhabism/Salafism. The outcome of all these multidimensional internecine conflicts is that the civilians are inevitably subjected to the receiving ends and, as a consequence, many millions have fled the country for fear of their lives and took refuge in Lebanon, Jordan and Turkey. If there are genuine refugees fleeing war-ravaged areas, they are Syrians; not Pakistanis, not Somalians and so forth.

So, when people crossing the Mediterranean Sea from Libya, Tunisia and Morocco to come to European shores in Greece and Italy, they are not all refugees; the large fraction is simply opportunistic economic migrants fleeing their countries under the cloak of war. The invisible hands of well-organised groups, most likely to be ISIS and al-Qaeda, can be sensed right across. The ISIS has the strategic interest in pursuing the ulterior motive. It may be remembered that only a year or so ago, when ISIS realised that they cannot cower down Europe militarily, they threatened to overrun Europe with Jihadists from across the waters and turn Europe into a Muslim continent.

The unprecedented flow of migrants or at best refugees must be seen within the narrative of the religious war that is being waged between the ISIS, aided and abetted by Saudi Wahhabism, and the West. A BBC report on Dec 5 2010 stated that a Wikileaks report showed that the then US Secretary of State Hillary Clinton warned that donors in Saudi Arabia were the most significant sources of funding to Sunni terrorist groups worldwide. The groups included Al-Qaeda, the Taliban and Laskhar-e-Taiba. The religious fervour emanating from Wahhabism/Salafism is engulfing the entire Muslim communities wherever they could be – be it in Asia or Africa, Europe, America or Australia. Islamic fundamentalism has washed away all other aspects of lives of large sections of Muslims – devout Muslims as well as hitherto liberal Muslims. Religious virus has overtaken their earthly existence and made them into zombies - always reminding them of heaven and hell in the afterlife and waging war against the infidels.

The ISIS has grown out of the fundamentalism of Wahhabism/Salafism, aided and abetted by the Saudi regime as well as by other GCC countries. Beheading of non-Muslims as well as Muslims of sects other than Sunnis is encouraged by Wahhabism. The whole swath of land stretching from north of Baghdad to Aleppo in Syria is under the Caliphate of ISIS. The ISIS also controls vast tracts of land in Libya, Somalia, Nigeria, Yemen etc.

The ISIS is doing what Quran tells them to do – convert infidels to Islam and, if found difficult, eliminate them; if your enemy kills a single person of your tribe, go and kill one of theirs; women must be kept indoors and be in total subjugation to men; and there are many other barbaric exhortations. Evolution is blasphemous in Islam - God created human beings and everything else and that is final. Anybody defying the Quranic teaching is to be punished by sentence of death under the Sharia Law.

Islam has pushed its followers to almost insane, barbaric states. Educationally, culturally, morally Muslims have become misfits to the modern world. Muslims pay lip services to Muslim brotherhood, but when it comes to helping other Muslims, they turn their heads away. Not a single Muslim country had volunteered to take refugees from the war-torn Syria or Iraq or Libya and give them the nationality status of the host country. War ravaged and displaced Muslims in the Middle East could easily be accommodated in neighbouring Muslim states. But those 'devout' Muslim states don't give a hoot to the plight of other Muslims. It has fallen to the Christian Europe to literally pick up the drowning Muslims from the Mediterranean Sea and give them food, shelter and now asylum. To add insult to the injury, Saudi Arabia has offered to fund 200 mosques in Germany for these refugee Muslims (but no food or shelter)!

The ISIS fundamentalists must have goaded these people from various parts of the Muslim world to take advantage of the largely open European Union (EU) borders. Once they are within the EU, they can legally move around in the passport-free 'Schengen zone' of 26 countries. To them it is the easiest way to Islamicise Europe.

However, the sinister move by the ISIS had not gone unnoticed by the European leaders. Hungarian prime minister, Viktor Orban, said that his country's southern borders are being threatened by the influx of unending migrants. He is planning to take measures to 'hermetically seal' the borders. Austria allowed at least 12,000 of these migrants to come to the country over the weekend (4 Sept 2015 to 6 Sept 2015) from Hungary under emergency measures. However, the Austrian Chancellor, Werner Faymann, said that the emergency measures will be gradually removed. Germany, the most generous of the EU countries, has made provisions to receive up to 800,000 refugees over the next two years. Britain is planning to take at least 20,000 refugees over the next five years. Nonetheless, the EU is under tremendous stress and is floundering to get to grips with this crisis.

Altogether the European countries are doing everything to alleviate the suffering of these migrants, many of them may even be ISIS agents sneaking in under the cloak of war. The libertarianism in Europe is severely tested and Schengen passport-free travel across 26 countries is likely to unravel.

Islamic teachings have created the brainwashed Muslims into ISIS savages who are now taking the fight into Europe by deception. They are the Trojan Horses mingling with the genuine refugees. They must be weeded out before the refugees are given permanent status to settle in Europe.

Fundamentalist ideology has done tremendous harm to the religion and caused immense suffering to the followers of the religion. The anti-science, anti-Western stance that Islam adopts has blighted the prospect of Muslims all over the world. The Wahhabism/Salafism is the enemy of Islam. The sooner the Muslims realise this  fact, the better it is for all the Muslims and for the whole world.