This is how Islamists attack

'Reporting Groups' concept used by Islamists congregating to serve one purpose only, false-report to Facebook, in masses

Few days ago, I came across an article being shared by Atheist Republic, discussing how they are under attack after publishing the Rainbow Kaaba. I got interested and read the whole article where the author described how their Facebook page, their Admins are getting abuse from Islamits, threats and how their Facebook accounts are getting suspended for no good reason.

To my surprise, I wasn't surprised, at all!

Because, we, the Bangladeshi bloggers, have suffered this kind of attack all too often. This kind of mindless attack, which I call Facebook terrorism, was thrown at us since the dawn of blogging history. But until now, I used to think attacks such as this were only limited to Bengali speaking blog-sphere. We are the most attacked blog community, and have to deal with the worst kind of Islamic infestation. four of our bloggers / authors were killed earlier this year due to Atheistic / Science blogging / writing.

After reading the Atheist Republic article, it now looks like, this problem is not confined within Bangladesh any more. The Global Islamic digital terrorism has now acquired enough resource and network to expand it's attack anywhere in the internet. Atheist Republic, it's Facebook page and it's Admins are also now targets of digital violence.

As you may know there's 1.6 billion Muslims around the world. A great number of them have access to the internet and own a Facebook account. we potentially have millions Muslims primed for protest against defamation of their religion (prophet)

Islamic authoritarian system works on a top-down approach. Social and psychological structure of pious Muslims rely heavily on 'scholarly' person(s) who announces strategy and 'to do' actions. These actionable commands are then obeyed by average Muslims without thinking and thereby creating waves of action within a very short time span. However, for this kind of instruction sets to work, the average Muslim must be able to understand and execute without too much hassle and disruption.

Facebook clicktivism, is a very good example of this kind of zero-touch-actions. Muslims are asked to perform certain actions, which helps the organizer of the action-collective to achieve desired effect on the person/page through hundreds or may be thousands of individual clicks.

In an effort to make Facebook a 'Safe Place' for  children and families, there are 'Reporting' facilities provided by Facebook. You can report any item you see on Facebook and can report it for reviewing. If a moderator finds the reported item to be in violation of any policy, they will take actions.

here it gets a bit tricky. Since Facobook has massive user base, All these reporting are not moderated and responded by FB staff manually. There are automation in place for certain cases. One case could be, (I'm guessing here) if the number of similar report for one ID or page or a status or a photo is considerably high, Facebook automation kicks in and takes that item / ID / Page / Status / Photo down almost instantly. As if there's a counter ticking always and the Nth report will remove it automatically.

Now, how do one post / ID can get attacked by 100s of reports!! you wonder? answer is simple. By being targeted by the 'Reporting Groups'. In these groups certain ultra active individuals will share a direct 'single-click' reporting link to the members, who's job, day and night, is to report report and do some more report. All they need to do is put up a post detailing the offence and provide some links masked behind link -shortening services. The members then open the post, click and submit the 'report'. And that's all it takes to build enough clicks for Facebook Automated suspension / deletion script to kick in. It's that simple. There are particularly evangelical 'reporters' out there who's day and night is spent fuelling this reporting machine. Facebook provides a nice little area called 'Reporting Center', and these busy bees have particularly blossoming report centre.

It all begins in Groups like these. Note the number of members in this sample group called Islamic reporting group.

Now, if you're a techie soul, like me, you might wonder further. How is it possible to generate such One-Click links! that is a mystery to myself as well. They are smart and have devised a way to generate such links, upon clicking takes you directly to the 'Submit' button. seen as below. 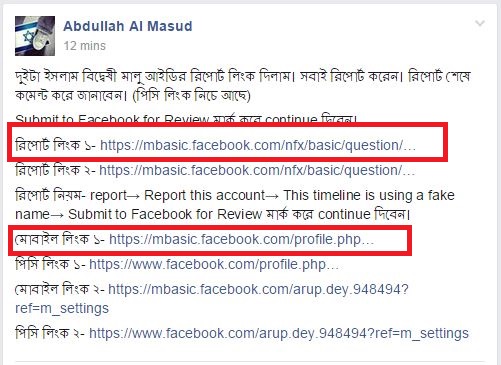 Another Example of Report directive.. 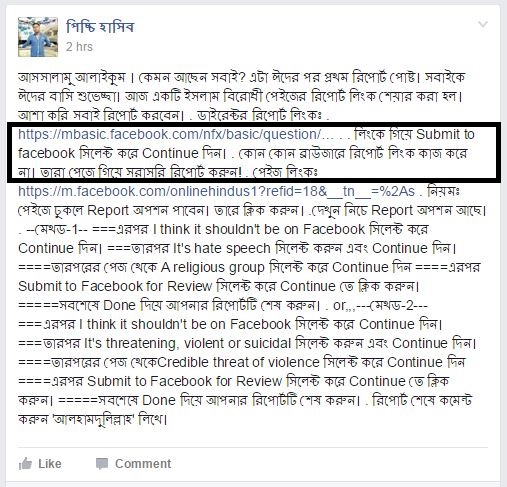 Call for Report by Directly clicking a URL[/caption]

The Links shown above, if you expand, looks like below. I don't know the process of generating this link, but it's effective.

The result is as below.

You reach a direct linkable page, where all you need to do is click 'continue' and then you've done your pious responsibility in saving Islam for the day.

Once sufficient number of reporting has been done. they are notified by Facebook, that 'action' has been taken. Facebook confirms the 'kill'. 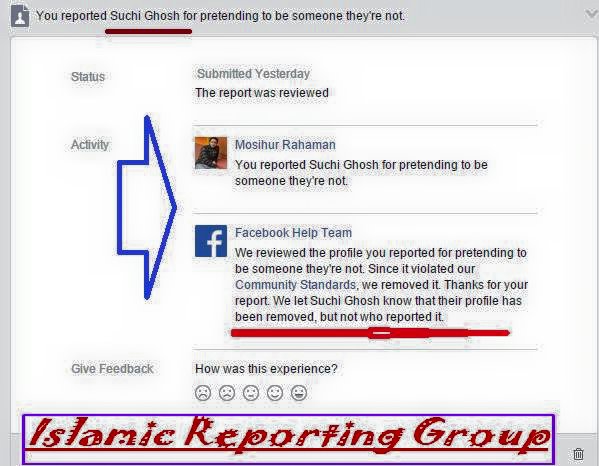 There are other Groups on Facebook doing similar stuff, but not very sophisticated. This one is based in Pakistan. Note the number of members…

So, the Problem we have at our hands may get escalated very very quickly if Pious and 'moderate' Muslims start to form such groups. At some point All 'non-Islam-conforming' content will be at risk of being wiped out by this process.

Since Writing the Original Article in my personal Blog I expressed fear that my account could be target of similar attack! My fear have come true. This morning When I tried to login, Facebook told me that my account has been 'Disabled. 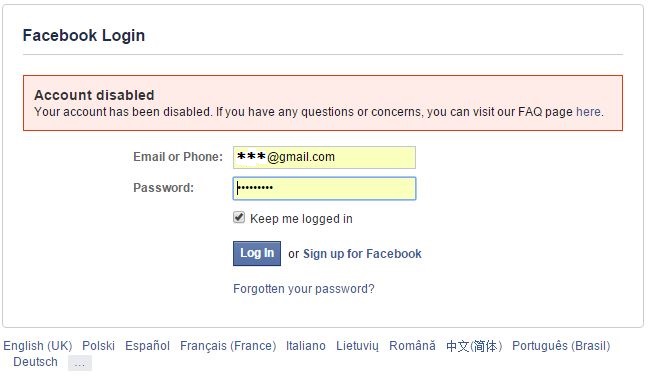 What can we do? I think there's little we can do as individuals.

But as a collective… We can…

End of the day, we must awake ourselves that something dark is engulfing us. If we don't know how to make ourselves aware, we will soon have nowhere to go.

Thanks for Reading. Please don't forget to Share and let others know.

[I am a Bangladeshi Blogger living in the UK. I am lucky (so far) that I'm in the UK. My friends have been killed and my name is in the 'List' as Arifur Rahman]