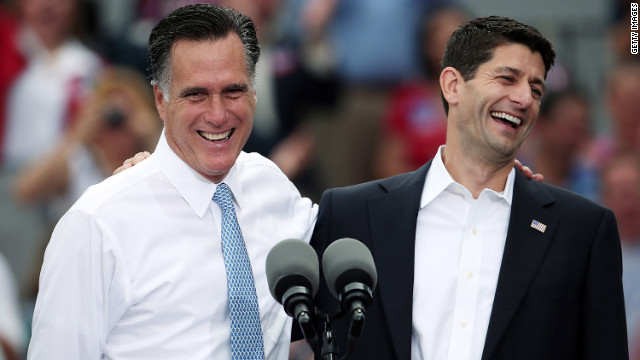 Together Mitt Romney and Paul Ryan have put human faces on how the super-rich game the tax system to pay less, pay later and sometimes not pay at all. Both want to expand tax favors for the already rich, like themselves.

Their approach favors dynastic wealth with largely tax-free (Romney) or completely tax-free (Ryan) lifestyles, encouraging future generations of shiftless inheritors. What we need instead is a tax system that encourages strivers in competitive markets, not a perpetual oligarchy.

Romney and Ryan say that lowering tax rates and reducing or eliminating taxes on capital gains and dividends, while letting huge fortunes pass untaxed to heirs, will boost economic growth and mean prosperity for all.

Romney, shifting the Republican focus away from red ink budgets, wants to slash income tax rates by 20 percent. Ryan has called for a 10 percent rate for married couples on the first $100,000, 25 percent above that. The details of both plans show they primarily benefit the highest paid and already rich, as multiple independent examinations have documented.

Romney also wants to greatly increase dynastic wealth by eliminating the estate tax, which I believe would have a devastating effect on future economic growth, entrepreneurship and social stability.

His plan would retain the gift tax, but it is already so porous that, as Reuters reported in January, the five Romney sons enjoy tax-free income from a $100 million trust fund on which no gift taxes were paid. Only about $2 million could have originally gone into the trust without triggering gift taxes. SLASHING TAX RATES

Under Romney's plan your economic future would be determined the same way it was in 18th Century France - primarily by who you picked as your parents, not by hard work, perseverance and that illusive element of luck.

Romney also wants to slash middle class spending programs, but despite issuing a 160-page plan he has not said just what he wants to cut or eliminate, asking voters to buy a pig in a poke.

Slashing tax rates, keeping the share of income taxes paid by the top unchanged and increasing military spending without any additional red ink may win votes from innumerates, but it is a mathematical impossibility. What is a mathematical certainty is that Romney would cut taxes on the rich and that everyone below the top would get a lot less back in services from the government.

The Romney tax plan is Bush II on steroids. The Paul Ryan plan is Romney supersized.

Ryan wants to lower Romney's own remarkably low 13.9 percent 2010 federal income tax rate to almost nothing – and it would be nothing if Romney passed up lecture fees.

That is because Ryan's 2010 "Roadmap for America's Future," would make capital gains, dividends and some other capital income tax-free. In April, 235 of 241 House Republicans voted for a new Ryan plan called "The Path to Prosperity" that obfuscated on taxes.

Nice deal for the already rich, not so much strivers and the vast majority who will never be able to live large on capital flows, taxed or not.

Ryan now speaks for Romney's version of reduced taxes on capital, but Ryan's spokesman confirmed that Ryan's goal remains making dividends, interest and capital gains tax-free for everyone. If Ryan's plans become law then what little income Romney earns from speeches and other work could easily be wiped out through leveraged real estate investments and other tax favors Congress already bestows on investors.

Ryan poses as a tax-cutter, but his forthright 2010 plan would raise middle class tax burdens by half, as we shall see…

Hardly anyone in America knows more about how to avoid taxes than Edward Kleinbard, who spent decades as a tax lawyer finding creative ways for clients to defer or escape their obligations. He has been doing penance by exposing tax perfidies, from 2007 to 2009 as chief of staff for Congress's Joint Committee on Taxation and since then as a tax law professor at the University of Southern California.

Kleinbard shows Ryan would turn individual and corporate income taxes into the equivalent of two large payroll taxes with the burden falling almost entirely on workers, not owners and executives.

The Roadmap "is a mechanism for redistributing tax burdens down the income scale," Kleinbard wrote.

"Most ordinary Americans would see their tax burdens increase by around 50 percent," he concluded, "while the most successful individuals would see reductions in their labor income tax rates, and elimination of all capital tax burdens – including the elimination of the gift and estate tax."

Every independent and credible tax expert whose reports I have read, as well as my own analysis, reaches the same basic conclusions about the Romney and Ryan vision: lower taxes for the already rich and highly paid; heavier burdens on the middle class along with cuts in government services.

The Romney campaign told me it pays no heed to analyses by the Tax Policy Center, even though Romney cited its work when it favored him in the primaries. The nonpartisan center is led by Donald Marron, a former economic official in the administration of Republican President George W. Bush.

The Romney campaign wrote me that the center's latest analysis is unfair and incomplete and "it's written by a former OBAMA staffer (Adam Looney)."

I checked. Turns out Looney, listed last among three authors, was a Federal Reserve economist detailed to the White House Council of Economic Advisers because of his technical expertise. Looney is a technocrat, not a political operative.

Looney told me he has never participated in any political campaign "and I am not sure I am even registered to vote."

Attacking Looney's, and the Tax Policy Center's, integrity is a low blow. It is also a way to divert attention from the merits, or lack thereof, in the Romney and Ryan plans.

And while not intended this way, those plans make the case for fundamental tax reform that honors the time-tested – and therefore profoundly conservative – principle of making those who gain the most from society bear the heaviest burden. Romney and Ryan would shove that burden onto those with less, a radical plan by an oligarch and his partner in promoting tax-free living for the richest Americans.