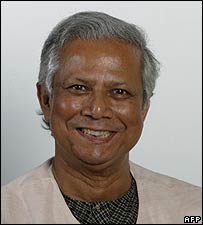 During my recent visit of Bangladesh (May-June 2007), I observed dissatisfaction of one one-time organizer of borrowers in my own village. A tin-shed structure in his property specially constructed for meetings of the borrowers. This structure now appears like an abandoned house as he uses this to store cow dung and agricultural products and by-products like corn, corn-sheathes and stalks, etc. "Most of the money we make goes back to the bank," he complained, "interest is too high".  In the beginning they never realized or thought about this interest rate. Getting some easy money was the main objective. Grameen Bank definitely helped the rural people including the destitute women. With their fate changed through Grameen Bank and for normal economic growth of the country due to government and NGO initiatives and scientific advancement, etc., the borrowers are now more educated and focused to realize the exorbitant interest rate of the bank.

Dr. Yunus had worldwide propaganda of his Grameen Bank that it has changed the economic landscape of rural Bangladesh. Former US President Bill Clinton did the best favor to this fever.  The short story is he got the Nobel Peace Prize of the year 2006. Irrespective of contributing to the rural cause of Bangladesh he has brought a colossal pride for Bangladesh. We received the honor of being the Nobel Prize winning country in the world community. This is the first time that Bangladesh has received such a rare prize. I am not sure we could receive another in the next hundred years. Dr. Yunus probably got the prize right in time when the propaganda on the success of Grameen Bank was at its peak. Had it been delayed by a year or so, he would not have been able to keep the momentum of the story of the bank afloat and we could not achieve this rare recognition. Thank you Dr. Yunus, Thank you Mr. Clinton. Grameen Bank has become the prime example to demonstrate the power of propaganda. And to the Nobel Prize Foundation, you have put the image and dignity of the Prize down to the dirt one more time.

With what I observed during my visit, I should say Bangladesh was lucky enough to get the rare recognition just before the glamour of the bank was eroded. I did see a definite trend of not borrowing money from the Grameen Bank. Its interest rate is really high. Dr. Yunus became Nobel Laureate on 6th December 2006. There were endless talks at that time about the success of Grameen Bank and the honor Bangladesh achieved as a result Dr. Yunus' wining the Peace Prize.  I talked over phone to one high official in Bangladesh about this unparallel honor for Bangladesh. The other end did not echo with much ecstasy as I had. He calculated the interest rate to be more than 30 percent. I ended the discussion with a broken heart as, whatever the interest is, we got the rare recognition and the poor of Bangladesh are now better off.

The first person known to me to denounce Dr. Yunus' contribution to the rural development in Bangladesh was former Finance Minister Saifur Rahman. I thought he could not understand the magnitude of a Nobel Prize. The rest of the story about the prize and his failed attempt to get into politics is still clear to our memory. However, Dr. Yunus is a highly regarded personality in the world. And he will remain as a hero of pride in the history of Bangladesh. Our youngsters will read his life sketch in the textbooks prescribed by the Secondary Education Board.

After receiving the grand Prize, Dr. Yunus intended to earn one more big name in another frontier – national politics. He started with a huge high-tech propaganda scheme Bangladesh could have ever imagined. I felt so ashamed of this low level desire of a Nobel Laureate. A Novel Laureate is the citizen of the world. How can such a big person add his name in the same list of our politicians?  Unfortunately for him, the child died before its birth. The country got rid of an extra political mess. However, with his intellectual immaturity he just added dirt to the status and respect on the Nobel Prize.

I have seen the Grameen Bank Empire located at Mirpur Dui Nombor. The building is a skyscraper like the Sunshine City 60 in the Tokyo city, Japan. It is just enormous for a single person to own within a short span of time in Bangladesh. However, he has made his fortune without breaking any law of the land. He can comfortably submit his account to the current emergency government if asked for. However, is it ethical to sweep the bigger share of the hard working poor of the country and build only one man's fortune?

To each brick, rod and to every piece of material and equipment in this empire are contributions from numerous Jubeda Khatoons, Faalani Begums, Amena Khatoons, Pari Bibis, Gulejan Bibis, Jobbor Alis and Dagu Mias; for every 100 Taka they borrowed they paid about 35Takas to this empire of Dr. Yunus. I wonder what remains in the hands of these poor fellows after payments made to the bank. In the beginning he targeted the rural poor as his potential borrowers and eventually turned into a business venture. Could he not keep the interest rate at a level tantamount to other banks in the country? He may have some philanthropic sugar coating to start the venture with some borrowed money. Had he been a philanthropist he would have charged even a lower interest rate just to sustain the organization. It seemed much like it was a business venture – a shrewd business. He became successful at his business and then started propaganda to draw world attention. He became equally successful in both of the frontiers.

From 1971 to 2007 the population of Bangladesh has doubled from 70 to 140 millions. But interestingly food shortage is not as acute as it was then. The credit goes to agricultural scientists and engineers who brought and developed high yielding rice varieties, replaced many traditional crops with wheat and corn and who introduced high technology in the agricultural sector of Bangladesh. Government and hundreds of NGOs are at work to improve the quality of the rural people. It is now for decades that one person from every five families of a village on the average has been working abroad. Day and night they are sending dollars, dinars, riyals back home. But all these efforts are ignored and undermined because the propaganda of the so-called bank surprisingly surpassed all of them.  Only one person managed to get the total share of credit and made history out of the fruits of many. I believe the improvement of rural Bangladesh has been in place for quite a while long before the launch of the Grameen Bank project. Nevertheless we should be happy that we got the piece of pie too - we have the first time honor and taste of a Nobel Prize.

During Emperor Akbar's reign, the farmers had to pay one-third of their produce as tax (Rajshahir Itibrittya by Ibne Golam Samad, p.39). The village riches used to charge exorbitant interest rate to the poor borrowers. Grameen Bank interest is no different than either of these infamous interest systems. Government of Bangladesh should look into the matter and put a ceiling on the interest rate charged by any bank or any individual for that matter.